Though it may appear to some that we feel secure in our domination over nature it is important on occasion to recall that this was not always the case. Certainly the news of late should serve as a reminder to this. Throughout all of the kingdoms of life that have ever existed on Earth there has been an ongoing arms race the prize of which is survival. This arms race has left within each us all a lasting legacy of immunologic memory of biological battles fought well before anyone alive was ever born. In a previous creatures log “the realms of the very small” I wrote about the microscopic creatures such as demodex that make themselves at home upon the surface of our bodies. For the most part these fellow travelers tend to cause us no harm. There are however whole legions of viruses, bacteria and parasites that are far less benign. As early man wandered around the coasts until he literally walk out of Africa into Eurasia he took with him only the parasites that came along for the journey. However there in the African cradle of human evolution there remains in the environment hosts of creatures that evolved specifically to parasitize us. 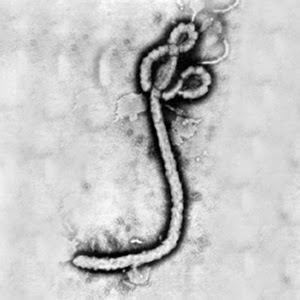 Ebola was discovered by the outside world only in 1976. Hidden there on the fringes of man’s territory it had surely lingered for millennia. Since that time in contained remote areas in central Africa there have been limited outbreaks in which entire villages have fallen in its wake. In the decades since it has elicited within us a nascent fear. Reminiscent of all the plagues of our nightmares it kills indiscriminately as jumps from host to host.Here in the west perhaps because we live far from the region of our natural evolution we erroneously feel we have had little to fear from our ancient nemesis. However there are no more “contained areas”, for anywhere in the world is now accessible within a day’s time. As our populations swell and technology everyday makes the world a little smaller, we should abandon this notion of invincibility in the face of a very old and sophisticated enemy. 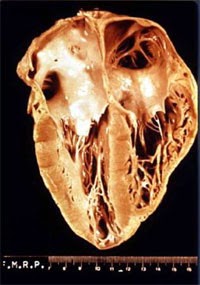 A heart effected by Chagas disease

Are we headed toward a perfect storm to which we will one day become extinct like all previous occupants of the top of the food chain throne? I would say not. The plagues that have for eons besieged our bodies are doing just as nature had evolved them to do and they have done it well. However despite this almost constant battle, along the way humans have not only survived but have thrived. Hidden within each of us transcribed within the strands of our DNA is the story of many a hard fought battle of survival. The evidence of which can be seen in the traces of parasitic bacterial and viral DNA sequences that abound intermingled with our native code. Some of these splices possibly date back to the beginnings of life on earth. These battles have undoubtedly influenced our own evolution.  Some of these subsequent adaptations may have greatly improved our survivability. However we should not fool ourselves that we should go unscathed this time. We will survive as we have done before.  This time we possess the advantage of foresight.   Armed with the latest that medical science can provide we should take the responsibility to do all we can.  We must remember while doing so to maintain a healthy respect for our enemy and an eye on our own frailty.